Posted at 13:07h in Uncategorized by admin 0 Comments
0 Likes

Flying cars are a common site in sci-fi movies. The floating auto has won hearts of many science fiction fanatics. Be it the glass bubble from “The Jetsons” or the cab from “The Fifth Element,” all these autos have mesmerized audiences for long now. Another runaway hit in this realm were the super duper flying cars from “Back to the Future II” that dash around on airborne roadways. Some designs show flying cars, also known as hovercars, soaring high up in the air while other models drift just a few inches above the ground. However, with claims that the car can be manufactured in actuality too, people are waiting eagerly for the concept to roll out. 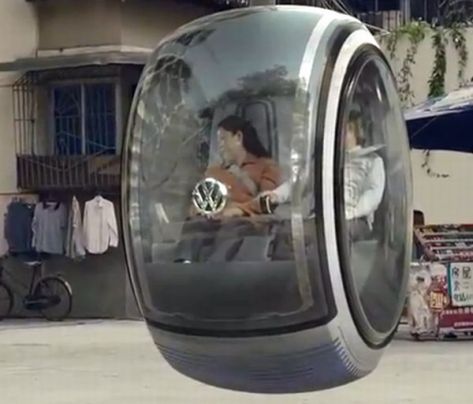 So, Volkswagen thought of creating a prototype of this futuristic car model. Dubbed as the “The People’s Car Project”, the company invited people to design their car of the future. A young girl from Chengdu city, who is actually a student of gaming design and animation, came up with a brilliant concept. Her design bagged the contest and the prototype crafted was turned into a video. You can check it out below.

The car basically has a spherical shape with space for two people inside. It has no wheel and floats a few inches above the ground. The image of the car floating in the middle of the street, when other autos are running on the road, is absolutely amazing. Circular glass discs have been fitted on the two ends of the car and an elongated glass panel has been fixed at the front. The glass and metal bubble looks utterly stupendous.

The concept car utilizes magnetic force to float in middle of the air. A magnetic suspension system is used in most of these designs, but the mechanism is not very stable, and hence wide scale implementation of the cars is not possible. Some of the models also make use of repulsion technology, which is basically a type of short range anti-gravity principle, to whizz around smoothly in mid air.

Sorry, the comment form is closed at this time.